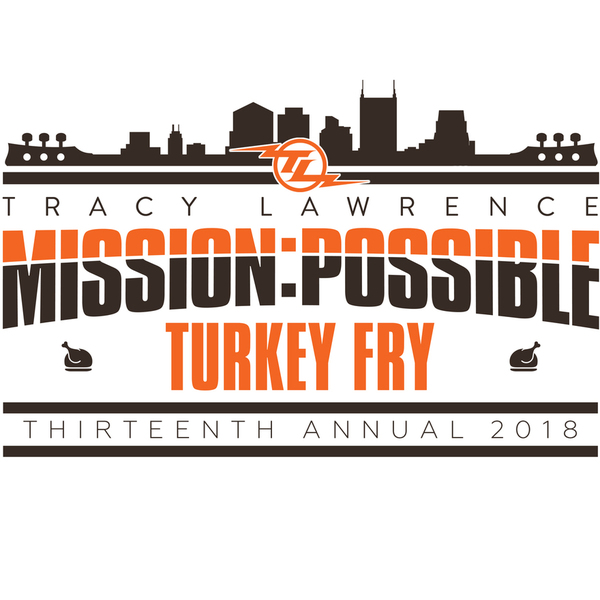 For 13 consecutive years, Tracy has given back with his MISSION:POSSIBLE Turkey Fry & Concert, and 2018 was no exception. Lawrence was joined by Nashville music, sports and entertainment celebrities and a host of volunteers, who gathered in the parking lot of Nashville Rescue Mission on Tuesday November 20th to fry over 500 turkeys for the homeless of Middle Tennessee.

The day of cooking, preparing and delivering meals was followed by the Turkey Fry Concert that evening at The Wildhorse Saloon. The show, hosted by WSM-AM Radio/Grand Ole Opry® host Bill Cody, featured guests including EMI recording artist Eric Paslay, BMG/Chrysalis singer/songwriter Doug McCormick, Outlaw Country duo Halfway To Hazard, newcomer Bristyn Camp, and a very special surprise performance by Phil Vassar. Lawrence finished the evening with a stellar headline performance of some of his iconic hits and his new Christmas song, “Frozen In Time,” which is the title track of his new holiday album, for which a portion of the sales proceeds benefit MISSION:POSSIBLE.

“I’m so thankful to everyone who donated, volunteered or just helped spread the word about MISSION:POSSIBLE,” said Lawrence. Helping the homeless and hungry during the holiday season is very important, but my goal with MISSON:POSSIBLE is to assist with these needs year round.”

“This year’s Turkey Fry was another great success,” said Glenn Cranfield, president and CEO of Nashville Rescue Mission. “It’s a real blessing to be able to serve those in need a traditional Thanksgiving meal and this event goes a long way in making that possible. We are so grateful for the support we receive from Tracy, the sponsors, the volunteers, and everyone involved.”

As in the past, this event could not have been a success without the help and generosity of some wonderful sponsors including ABEC, Blue Rhino, Cargill, Civic Engineering, DCR, King Cooler Outdoor Cooking Products by Metal Fusion, LHC Group, LouAna Oils, W&W Logistics, Nelson Mazda, Renasant Bank, Richards & Southern, Southern Lawn & Equipment, Van Meter Insurance, Walmart, Wildhorse Saloon and WME.

The MISSON: POSSIBLE blueprint is spreading to other cities. The Dallas Life Mission celebrated their third turkey fry with tremendous growth this year. See new coverage of their event HERE. Having more than 100 volunteers and many sponsors to assist, over the last three years Dallas Life fried over 350 turkeys to serve over 2,000 meals for Thanksgiving and gave turkeys to police officers, firefighters and their families. As the largest homeless recovery center in North Texas, Dallas Life was proud to care for so many by taking part in their third annual MISSION:POSSIBLE Turkey Fry. “We are so grateful to the sponsors and volunteers who showed they care for the needy by taking part today! This is how we can give a hand up and not a hand out.” -Bob Sweeney, Executive Director, Dallas Life.   To make a donation to Dallas Life click HERE.

Louisville Rescue Mission held their second event and reported frying over 112 turkeys, since beginning their event two years ago, providing hundreds of meals for the underserved in their community.  Lawrence, who was in the market for a concert stop joined Executive Director Corey Bledsoe on Louisville’s WHAS-TV to talk about the event.  See coverage HERE.

“Our second annual Mission: Possible Turkey Fry was a huge success. We fried almost twice as many turkeys this year and expect to continue along that trajectory. It’s already becoming a true community event. From the donors to volunteers to our ministry partners who helped distribute turkeys, we served hundreds of families in the Louisville area. Mission: Possible is helping us not only provide for the tangible needs of the homeless, but raise awareness about the spiritual, psychological, and relational needs that exist longer after the holidays. Louisville is really catching on. We’re looking forward to next year!” said Cory Bledsoe, Executive Director of Re:Center Ministries.   Donations for Re:Center can be made HERE.