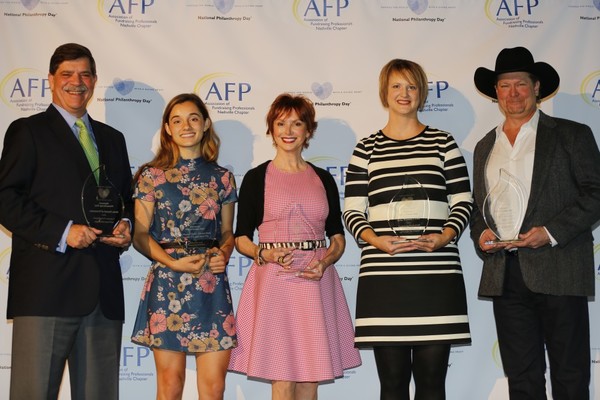 The event, put on by Middle Tennessee’s chapter of the Association of Fundraising Professionals (AFP) recognized donors, volunteers, foundations, leaders, corporations and others engaged in philanthropy who made large positive impacts on the community in 2015.

Lawrence has long been in partnership with the Nashville Rescue Mission, fundraising for the organization and feeding more than 75,000 in need throughout the past decade with his annual turkey fry. In addition to meals served, more than $63,000 was raised at the 10th Annual Mission: Possible Turkey Fry Concert on Nov. 24, 2015 at City Winery which prompted the Rescue Mission’s submission of Lawrence for Philanthropist of the Year.

“What an Amazing honor to win the Nashville Philanthropist of the year award. I am so thankful that I have the opportunity and the ability to give back to the Nashville community that I so dearly love,” comments Lawrence. “I hope that I will be able to continue to serve those less fortunate for a long time.”

Music City’s AFP chapter is one of more than 230 chapters across the country that has, together, generated over $1 trillion through National Philanthropy Day since 1960. NPD is not only a federally proclaimed day by President Reagan, but a grassroots movement that has grown into a nation-wide effort for the able to get involved in giving back. Lawrence along with four other dedicated humanitarians were awarded for their work throughout their communities at NPD’s ceremony.

Philanthropist of the Year: Tracy Lawrence

Philanthropy is “the love of humankind,” and National Philanthropy Day® (NPD)is the day that thousands of people around the world come together to put that word into action and recognize the change that word has brought to our communities.

NPD is a celebration of philanthropy—giving, volunteering and charitable engagement—that highlights the accomplishments, large and small, that philanthropy—and all those involved in the philanthropic process—makes to our society and our world. Here in Nashville hundreds join each year in the National Philanthropy Day celebration.