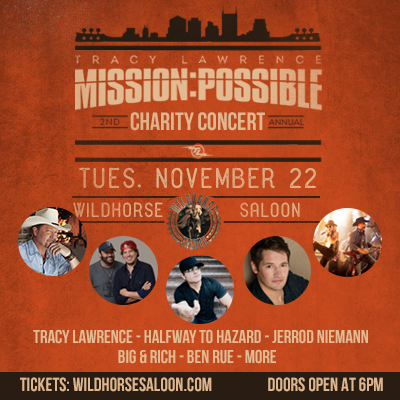 In the last three years alone, Tracy Lawrence has raised $120,000 for Nashville Rescue Mission with his annual Mission: Possible Turkey Fry. But for the country music star and nationally syndicated radio personality, that’s only the beginning. For the second year, Lawrence will double down on his 10-year-old Thanksgiving season tradition by hosting a star-studded benefit concert for the Mission, which aids the city’s hungry and homeless.

His second annual Tracy Lawrence Mission: Possible Charity Concert will take place Tuesday, November 22 at Nashville’s Wildhorse Saloon. It will feature performances from Lawrence and his country-star pals Big & Rich, Jerrod Niemann, Ben Rue and returning guests Halfway to Hazard, all donating their time and talent to the cause. Tickets go on sale Wednesday, October 19 at 11:00 a.m. and can be purchased at www.wildhorsesaloon.com. Doors open at 6:00 p.m.

The Turkey Fry itself is also growing this year. In conjunction with the Association of Gospel Rescue Missions, rescue missions in Dallas, Louisville, Ky. and Asheville, N.C. are duplicating Lawrence’s popular event the week of Thanksgiving to raise awareness and serve their own local homeless communities. This year’s local Turkey Fry will be heldNovember 22 at Nashville Rescue Mission.

Earlier this year the Middle Tennessee Chapter of the Association of Fundraising Professionals honored Lawrence as its Philanthropist of the Year specifically for his work on behalf of Nashville Rescue Mission, recognizing him for making a large and positive contribution to the community. Funds raised by the singer at his annual event have helped provide more than 75,000 meals to those in need, and more than 5,000 turkeys have been fried and donated to the Mission.

The Turkey Fry is only part of Lawrence’s personal mission to help those in need. Last month, his Louisiana Flood Aid concert in Baton Rouge raised more than $15,000 for Samaritan’s Purse, a charity helping victims of recent flooding in the state. The money raised is being used to build and restore homes for families affected by the high waters.

Lawrence’s philanthropic efforts also include a partnership with Exclusive Genetics’ Bucking Bull Games that benefits St. Jude Children’s Research Hospital. The singer’s bull, named Honky Tonkin’ after his radio show, recently won $6,000, all earmarked for the hospital and will go on to raise more funds for the organization at the finals in Las Vegas October 31-November 4.

“Thanksgiving is such a special time of year for me and my family. A time to share and be thankful for all that God has blessed us with,” said Lawrence. “It’s also a very humbling time, knowing how much suffering and pain is going on in the world. It makes me treasure the opportunity that myself, my friends and my family have to give back to our community through the Nashville Rescue Mission. I will continue to be overwhelmed by the support and love that comes out to volunteer and donate to their fellow man during this week.”