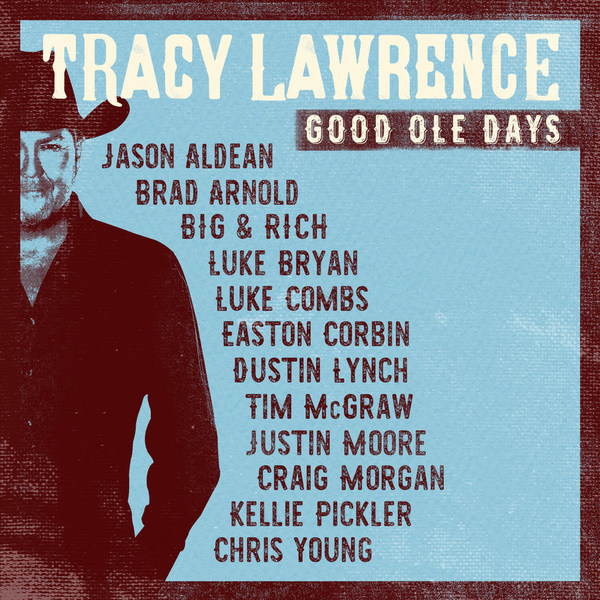 Tracy Lawrence has set November 10, 2017 as the release date for one of the most ambitious and significant albums of his career. GOOD OLE DAYS celebrates the country legend’s indelible mark on country traditionalism with an album of 11 duets pairing a selection of his most iconic hits with some of Country and Rock’s contemporary superstars and newcomers. See some behind the scenes footage HERE.

“There’s such a hunger out there for the music from my era – I hear that from so many people, so I felt like this was a good time to kind of blend the old and the new,” said Tracy. “My first commitment was from my buddy Tim McGraw, who chose to sing ‘Time Marches On,’ on the new record.”

When asked about which of his songs is his all-time favorite, Tracy admits that choosing one is a lot like trying to single out a favorite child, it’s just not something that’s easy to do.

The collection in its entirety is equally special, and Lawrence is humbled by the excitement that his peers brought to the studio with their eagerness to keep each track as pure as the day it was first recorded, with only minor exceptions and a few added new nuances. Lawrence is excited to offer the first instant grat track “Can’t Break It to My Heart,” the duet with country superstar Jason Aldean, as part of the album preorder which is available today HERE.

Craig Morgan lends his vocals and heartfelt raw emotion on “Finally Home,” one of the two new tracks and an ode to U.S. military members celebrating their enduring service to our country. Tracy and Craig debuted the song together in a performance on the hallowed stage of The Grand Ole Opry® on August 15.

A portion of the proceeds from “Finally Home” will be donated to Operation FINALLY HOME, a national, non-profit organization providing mortgage-free, custom-built homes to wounded, ill and injured veterans or widows of the fallen, thanks to their unique network of experienced builders, suppliers, and supporters dedicated to honoring heroes with homes.

Whether it is celebrating his iconic hits with fresh new tracks or writing material for his next studio record, Lawrence knows if he stopped today he’d already have cemented his place in the pantheon of country-music greats.

“To realize that I’m older now and being looked at by younger kids in the same light as I looked at guys like Strait and Haggard, it’s very flattering,” he notes. “To know that I’ve made music that’s had that kind of impact on people, well, it’s pretty cool.”